Cannon Hill Woodworking is comprised of a small team of highly talented woodworkers, designers, and builders. While growing steadily, we continue to maintain high levels of attention to detail in every project, and unmatched service with every client. 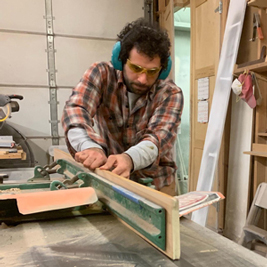 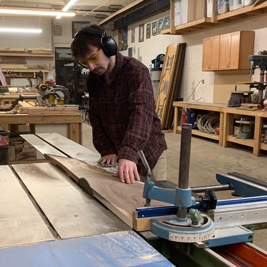 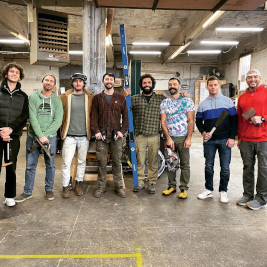 Zack grew up in Back Bay and Brookline. He attended the Roxbury Latin School in West Roxbury and the University of Pennsylvania. After college, he spent two years as an elementary school teacher in both Boston and San Francisco before becoming a professional carpenter. He got his start with Robertson Design Build, now Shake Architecture and Construction, in high-end residential remodel and new construction projects in Massachusetts and Connecticut. He took a break in 2016 to hike the entire Appalachian Trail from Georgia to Maine. He then lived in Burlington, Vermont where he built a commercial barn for Geobarns on Lake Champlain. Prior to founding Cannon Hill, Zack spent years building tables in the Boston area. He was briefly a licensed General Contractor in the state of Massachusetts, but he never used that license as he became far too busy making furniture with his talented team. With Sam and the Cannon Hill team, he has built and delivered over 500 unique custom tables. He lives with his wife and son, and dog Moose, in Hyde Park, Boston.

Sam is one of the original founders of Cannon Hill Woodworking. A graduate of Arlington High School, Sam completed his degree in Industrial Design at the Wentworth Institute of Technology. He has always had a passion for making furniture and tinkering with machines and wood. Early in high school, he built his own shop in his parents' home in Arlington and started to produce his own projects.  After being inspired by some of the best furniture design in the world while studying abroad in Germany, Sam worked full time in a furniture shop in Boston as part of his Wentworth co-op experience. At Cannon Hill, Sam is Head of Design and the Workshop Guru. His incredible woodworking skills have led to some of our most unique and complex builds. He does beautiful hand drawings of furniture and computer spec (CAD) renderings for our clients.

Kevin grew up in Wellesley and, like Zack, is a graduate of Roxbury Latin. He went on to Boston College, where he earned a degree in English — harboring an ambition to learn furnituremaking the whole time. Originally a homebuilder by trade, he met Zack on the job sites where they came up together. Kevin has worked with several high-end residential contractors in Boston, and also ran his own carpentry subcontracting outfit. After helping out at Cannon Hill off and on over the years and assisting on the shop build-out, Kevin eventually joined the team full-time. He now splits his time at Cannon Hill between the shop floor and the administrative side.

Mark attended Westford Academy and after graduation, enlisted in the United States Coast Guard. He spent 4 years at USCG Station Woods Hole on Cape Cod. After the Coast Guard, he worked in construction and then at Comcast as a lineman.  In 2019, he went back to school and received his Associates Degree in Information Technologies from SNHU.  He has always loved woodworking and at a very young age his father taught him how to use tools and to build.  What started out as a hobby during the pandemic has now transitioned to a full-time job and he couldn't be happier to be part of the Cannon Hill team. He enjoys tough, technical builds as it gets his creative juices going.  Mark is the strongest member of the Cannon Hill Team (or so he believes) so you will likely meet him on some of our more massive table deliveries.

Nick Mamakos was born and raised in Natick, Mass. A graduate of Natick High School, Nick has always had an interest in the arts and working with his hands to create physical and functional pieces of art. He attended Massasoit Community College for art before moving to Los Angeles where he began to have semi-professional interests in woodworking. In 2008 he moved back to Boston to attend the prestigious North Bennet Street School in the two-year Cabinet and Furniture Making Program. Finding it hard to find work in furniture building, he then worked in high end construction in Metro West and in other woodworking related enterprises. In 2021, he reached out to Cannon Hill after his mother found us online, and we jumped at the opportunity to bring him on board. He was looking for a small workshop where the process is meticulous, professional, and creative and where the team is tight-knit. We never make the same piece twice, which also makes it more interesting for an artistic guy like Nick. Nick currently lives in Natick, and spends his weekends cooking, and in his own woodshop at home.

Isaac grew up outside of Boston, building and remodeling fine homes with Canney Construction, his father and uncle’s design-build company. He graduated from Hampshire College in Amherst, MA, where he focused on an interdisciplinary study of architecture and sustainable design. He returned to the family business after college, and later attended the Cabinet and Furniture Making program at the North Bennet Street School. After many years as a frame-to-finish carpenter, Isaac was eager to get into the shop full-time, and joined the Cannon Hill team in 2021. He loves the close-knit, collaborative culture and shared commitment to crafting beautiful pieces built to last for generations. He lives in Jamaica Plain with his wife, their two kids, and dog Sadie.

Dave's passion for building things out of wooden blocks started in central New York where he grew up and where his family has roots in the agriculture business. In college he studied literature, geology, and education, travelled to Central America for a year, worked at several outdoor adventure camps, and found himself working at a small high end woodworking outfit during his summers. Woodworking became his favorite hobby as he began a career teaching high school English, first in Syracuse, then in Boston after moving here to pursue a Master's degree in literature. He taught in a handful of schools and landed at Brookline High School where he taught English for eleven years. The opportunity to join Cannon Hill coincided with his decision to leave his teaching position, and he has shifted his energy to woodworking full-time. Dave is consistently awestruck by the exceptional skills and knowledge of the crew, and by the beauty of the magnificent wood they put their hands to every day. He lives in Watertown with his wife and dog, and finds daily inspiration in the Cannon Hill team and the stunning custom tables they build together.

Moose is the Golden-Doodle of Cannon Hill Woodworking. Moose specializes in sleeping (despite loud noises) and being adorable. He loves running around at the park, chewing sticks, and eating cheese.  He occasionally sneaks into the photos on our Instagram account. Moose no longer looks anything like he does in this photo. He's a big boy now, but he is still the sweetest.